Millennial Dating: WTF Am I Doing?

As an almost twenty-one-year-old college girl (I’ll be 21 on March 25th, send me some love on that day), navigating the millennial dating scene can be a little confusing/overwhelming/what-am-I-doing. The closest I’ve gotten to dating in the last six months is kissing a stranger on New Year’s Eve, and flirty texting my hot ER nurse for a couple of weeks, only for him to tell me he’s actually seeing someone else. (C, if you’re reading this, you’re the most beautiful person who has ever stuck an IV in my arm.)

There are so many different modes of communication, most of which take place on a digital platform. Do I message this guy on Facebook or DM him on Instagram? Do I start swiping on Tinder or is Bumble better? Is it true that most people my age don’t want a serious relationship, and would rather a casual hookup? How can I tell?

Rest assured, I took matters into my own hands and discovered some truths that will help both you and me navigate the 2018 dating scene.

Dating apps both intimidate and intrigue me. I’ve never personally used a dating app, but find it completely fascinating to watch my friends use them. When I think about millennial dating, my mind goes straight to Tinder. My perception of dating apps is that most people my age use them. Surprisingly enough, out of the 100 millennials I surveyed about dating, only 17% of them listed dating apps as the main method they use to meet people.

That’s not to say dating apps are not popular among the millennial age group. Dating apps have become sort of a hobby amongst young millennials. Francis Thomas, a student at Saint Joseph’s University in Philadelphia, PA, says that he uses dating apps as a stress reliever. Francis states, “Something about flipping through it is soothing.”

Sara Wynn, a student at the Savannah College of Art and Design (SCAD) says that dating apps can be a great resource, especially if you are in a new city trying to meet new people.

Which is exactly how SCAD student Savannah Newman has used dating apps in the past.

“The first time I heavily used [dating apps] was in New York when I was there my first summer of interning. I met a few guys.”

Some people find serious relationships through dating apps. Liz Bailey, a 27-year-old professional in Raleigh, NC, dated a guy for almost a year that she met on Bumble.

One of my roommates, Julia McDonough, met her current boyfriend on Tinder, and they’ve been together for almost a year now.

An important part about using dating apps to meet people is to be clear about what you want, and what you are looking for.

“When you meet someone, whether you want to hook up or you want a serious relationship”, Sara states in an interview, “as long as you are both on the same page, I think it’s fine.”

Which dating app should I use?

There is a lot of speculation about the best dating apps to use. On the survey I sent out, 71% of millennials ranked Tinder as their number one preferred dating app, with Bumble as a close second.

As I researched what dating apps to include in this survey rank, I added apps I had never heard of, aka Happn, Coffee Meets Bagel, and Down. (Yes, I spelled Coffee Meets Bagel wrong in my survey, I guess I was thinking of food more than dating, but what’s new.)

Speaking of Coffee Meets Bagel, I was surprised how many people voted for that app as their favorite. Lots of college girls listed this app as their top choice, which makes me extremely interested to try it out.

Chatting with Savannah Newman, she tells me, “Bumble is better than Tinder, because girls get to make the first move, and the guys are better looking.”

Going back to what Sara said, it really depends on what you’re looking for to find the dating app that fits with your lifestyle.

I tend to stereotype my age group as being hookup-obsessed looking for no commitment, mainly because those are the stories I hear. But out of the millennials I surveyed, 66% of them said they are currently looking for a serious relationship. I guess all of those millennial swipers aren’t just looking for a one-night-stand. 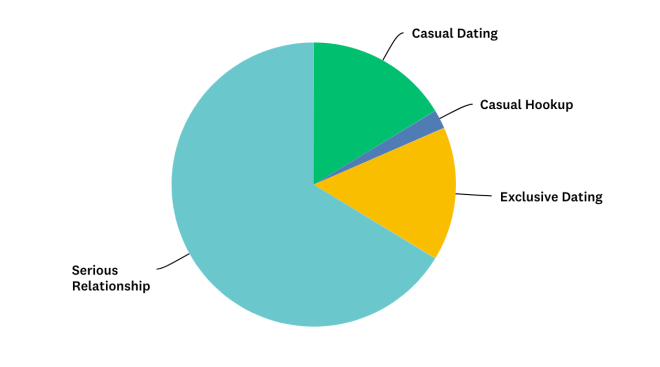 This statistic seems high, especially since 77% of the millennials who took my survey are in college. Being a college student myself, I am not in the mindset to actively seek a serious relationship, as I am actively seeking a career, which is pretty time-consuming.

A lot of people I am close with aren’t looking for a relationship at all. Like I said, many of my friends are actively seeking careers instead of a significant other. I think what Savannah said in her video interview is a great point to make. Younger millennials should learn to fall in love with themselves before they try to love someone else. I think in the stage of life my friends and I are in, we are discovering and loving ourselves, spending time to know ourselves fully before seeking a serious relationship.

Even though lots of people I know want to pursue their careers over significant others at the moment, that doesn’t change the statistics about 77% of them seeking serious relationships, and it also doesn’t change the fact that just about half of the survey group said they want to “settle down” between the age of 24 and 28. Seems a bit young, in my opinion. But if I look at the people in my life who are married, they were married even younger than that range. My parents were married at 22 and 23, as were my brother and sister-in-law. My childhood best friend recently got married at 20. Growing up, I thought everyone should get married at that age, right out of college. Why wouldn’t you?

Well, younger Reb, because not everyone’s story is the same. My brother met his wife freshman year of college. My childhood best friend met her husband in high school. Me? I discovered my passion for fashion, writing, and my love for connecting with others through art my freshman year of college, and continue to fall in love with my career path everyday. I discovered my quirky, social-yet-introverted, goofy, loyal, driven personality. I discovered my amazing group of close friends who encourage, support, and inspire me everyday. I don’t see myself settling down any time soon, and I wouldn’t change my story for anyone else’s.

Through talking with various couples, singles, and everyone in between, it seems that, even in the midst of dating apps and the thrill of meeting up with strangers, people meet mostly through mutual friends.

What I have noticed through this process, though, is that meeting people through mutual friends does not exclude those other attributes. You can swipe for a person you have seen around or have talked to a couple of times. You can message someone on social media who you have met briefly, or share common friends with. Most of the couples I have interviewed or surveyed met through mutual friends, to some degree.

A common thread I found while talking to millennials my age, single or in a relationship, is that it is important to stay an individual.

“I think an important part of dating is not losing yourself in the other person”, Manny Otriz says in an interview. “You need to be an individual dating someone else.”

Savannah tells me, “I’m not going to sacrifice myself or my dreams if someone else doesn’t want them too. I think that, in millennial dating, because of the constant media intake, you are structured to think that you need someone else to live this life with, but that’s not true.”

I couldn’t agree more. I think that’s where I went wrong in my last serious relationship. I morphed into who I thought he wanted me to be, and in the process, completely lost myself. Dating or not, you should know who you are, love who you are, and be confident in what that entails. Be with people who bring out your truest form, who make you the best version of yourself. The best relationships are the ones who encourage you to be unapologetically yourself.

Well, there you have it. I’ve shared my survey charts and interview insights. I’ve given a couple dating pointers, but at the end of the day, how you date is up to you. Millennials don’t need to fall into a “millennial dating routine”. If you don’t want to use dating apps, don’t use them. If you don’t want to casually hookup with people, then don’t. If you want to be a contestant on the Bachelor or Bachelorette, go for it. (I will be tuning in, for sure.) If you are focusing on something other than a relationship, but still want to enjoy meeting people and having fun, then swipe away. Everyone’s dating story looks different. There is no right or wrong way to date, no matter the day and age you live in. Find what works for you, and roll with it.

My advice for you, is whatever you’re looking for, remember who you are, and remember that who you are is pretty dang awesome. Don’t let anybody take that away from you.